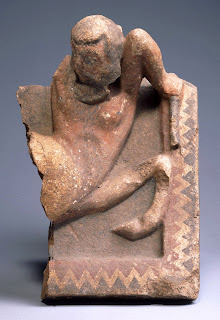 Among the antiquities which are to be transferred directly to Italy as a result of the October 30 2007 agreement between Princeton University Art Museum and Italy is a polychrome terracotta architectural relief with a centaur (inv. no. 1995-129). Details of the original acquisition appear in the Record of the Art Museum, Princeton University 56, 1/2 (1997) 61, 62 (ill.) [available on JSTOR].

Six of the eight pieces (four will be on loan to Princeton) which will have their title transferred to Italy were "museum purchases"; two were gifts. This terracotta relief is recorded as:

Gift of Ali and Hicham Aboutaam.

Their appearance here is interesting. Ron Stodghill ("Do You Know Where That Art Has Been?", New York Times, March 18, 2007 [archived]) reported on their activities earlier this year. Hicham Aboutaam is quoted as saying:

“When all those things happened at the Getty and Met, people assumed, ‘This is end of the antiquities trade because antiquities are evil,’ but I think what happened has been good for the whole field.”

Does he have any statement to make about why his gift to Princeton is now being returned to Italy? What was the source for this architectural relief?