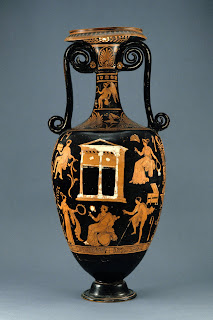 One of the features of the recent returns of antiquities from North American collections to Italy has been the presence of Apulian pottery attributed to the Darius painter.

It started with the return of Boston's amphora (1991.437) showing the murder of Atreus. This had surfaced through Atlantis Antiquities in New York and Fritz Bürki & Son of Zurich. It had been semi-purchased by Shelby White and Leon Levy with a half share by the MFA (purchased "with funds given by the Jerome Levy Foundation").

Then there was the pelike from the Getty (87.AE.23) showing the return of Andromeda. This had been purchased from Fritz Bürki & Son of Zurich.

And now there is the Princeton loutrophoros (y1989-29) with the mourning of Niobe. This was acquired as a "Museum purchase, anonymous gift". (Who sold it to Princeton?)

The three have been listed together before. The Boston catalogue Vase-painting in Italy (1993) noted in a discussion of a work attributed to the Darius painter (no. 41),

Recent years have seen a host of new vases by the Darius Painter with rare or unique mythological subjects ...

The catalogue then gave a list of pieces that included the three that have been, or will be, returned to Italy. It is now becoming clear how these "new vases" were surfacing.

The Boston MFA catalogue list also includes "three volute-kraters in Berlin, one with the raid on the camp of Rhesus (1984.39), one with the rape of Persephone (1984.40), the third with Phrixos, Helle, and the ram (1984.41)". These had all passed through Switzerland and are part of a much larger grave-group.

The MFA, Getty, Princeton (and Berlin) pieces were acquired between 1984 and 1991. Professor Ricardo Elia has noted in a study on the "Looting of Apulian Red-Figure Vases",

An additional 31 per cent of the total corpus [of Apulian pots], more than 4200 vases, has surfaced between 1980-1992. Virtually all of these additional vases are undocumented and unprovenanced and are likely to have been looted from Italian sites.

I have noted before that there has been the (misplaced) suggestion that Elia has overstated the scale of the problem of looting in South Italy ("Apulian Pots and the Missing Memorandum"). But this latest agreement from Princeton (which includes an additional Apulian piece) seems to confirm Elia's research.

Red figure loutrophoros (ceramic), attributed to the Darius Painter. South Italian, Apulian, ca. 335-325 B.C. One of four objects to be transferred in title to the Italian government but to remain on loan to the Princeton University Art Museum.