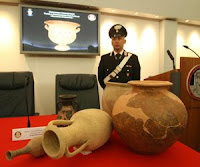 Earlier this week the Italian Carabinieri announced the results of four successful operations. Some 33 antiquities were recovered; these had been either stolen from museums or looted from archaeological sites.

The four operations are: