Shelby White and Greece: is there an update? 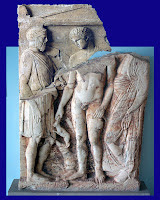 The press release of July 11, 2008, announcing that Shelby White would be returning a bronze calyx-krater and a fragmentary marble funerary stele to Greece stated:

Both antiquities are very important, rare, and their repatriation will take place within July 2008.

Although the impending return has been noted in the Greek press, there does not seem to be an announcement that the handover has actually taken place.

It is all so reminiscent of how the statements relating to the Icklingham bronzes and the returns to Italy were handled (and see the final list issued in March 2008).
- August 05, 2008

Hello and congratulations on your excellent blog!

The upper part of the marble stele and the bronze krater are now both in Athens. So far, I'm afraid I can only give you a link in Greek:

For the update with relevant comments on the Greek report see here.