Farewell to Liapis as Hellenic Minister of Culture 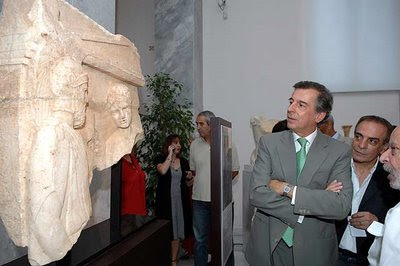 Mihalis Liapis stepped down as the Hellenic Minister of Culture on January 8, 2009 after 16 months in office (press release). The incoming minister is Antonis Samaras.

The speeches for the ceremony have been released. Liapis spoke about the financial challenges to the Ministry and he painted a bleak picture for his successor: "The road is difficult, upwards and ... lonely, but the Ministry deserves a better fate" (Ο δρόμος είναι δύσκολος, ανηφορικός και ... μοναχικός, αλλά αυτό το Υπουργείο αξίζει καλύτερης μοίρας.). (See also press reports in Greece.)

Liapis placed Greece's cultural claims firmly on the international stage through the hosting (in March 2008) of the UNESCO conference in the New Acropolis Museum. He has strengthened links with Italy that led to the Nostoi exhibition in Athens. This coincided with the return of fragments of the Parthenon from Palermo and the Vatican. But he has also initiated claims on more recently looted material; recent returns include an Attic marble funerary lekythos from a Swiss dealer, and two pieces from the Shelby White collection.

Image
Mihalis Liapis at the return of an Attic funerary stele from the Shelby White collection. (From the Hellenic Ministry of Culture)
- January 14, 2009