Looted Antiquities from Puglia on Display in Rome 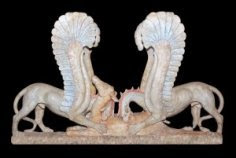 Antiquities looted from Puglia have gone on display in a special exhibition, "Marble's Secret - Polychrome Marbles of Ascoli Satriano", at the Palazzo Massimo in Rome. The objects include a marble lekanis, and a marble group of two griffins attacking a fallen doe. Both had formed part of the Maurice Tempelsman collection in New York, and were acquired by the J. Paul Getty Museum in 1985. They have formed part of the returns to Italy.

The exhibition press release, "Tomb raiders' marbles feted in Rome" (January 5, 2010), notes that the pieces were looted from a tomb outside the ancient city of Ausculum, the modern Ascoli Satriano, in Puglia. Christopher Chippindale and I have noted elsewhere the links with Giacomo Medici, Robin Symes, and Robert Hecht. There were also reports that the tomb contained pots attributed to the Darius painter (works attributed to this pot-painter feature promiently in the returns to Italy).

The exhibition is a reminder how North American private collectors were buying recently-surfaced antiquities from Italy.

The marble pieces will go on permanent display in the Museo Civico in Ascoli Satriano once the exhibition closes.