The Morgantina Hoard: the collecting context 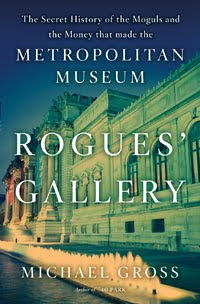 The Morgantina hoard has now gone on display in Rome. The efforts of Malcolm Bell and the Italian authorities have done much to identify the orginal contexts for the hoard(s).

But what about the museum context? Michael Gross has a short section in his Rogues' Gallery. Gross records that Bell first saw the hoard in New York's Metropolitan Museum of Art in the fall of 1987; he "recognized them immediately ... [and] put two and two together and notified the Metropolitan of that fact". Bell also entered into correspondence with Dietrich von Bothmer.

Gross reminds us, "In 1993, the Metropolitan had refused the archaeologist Malcolm Bell's request to closely examine the Morgantina objects". If this is true (and I have no reason to disbelieve it), then it says a great deal about the Met's attitude to enlightenment and comsmopolitan ideals.

Reference
Gross, Michael. Rogues' Gallery: The Secret History of the Moguls and the Money That Made the Metropolitan Museum. New York, N.Y.: Broadway Books, 2009. [details]