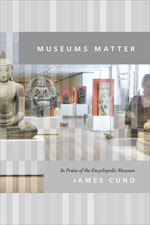 My review of James Cuno's Museums Matter: In praise of the encyclopaedic museum (Chicago: The University of Chicago Press, 2011), is now available in The Journal of Art Crime 7 (2012), 86-87. [Link to publisher]


Cuno is passionate about the contribution of the encyclopedic museum to the cultural landscape of our cosmopolitan world. The implicit statement of his title is a change from the earlier questions that he has raised: Whose Muse? (2004), Who Owns Antiquity? (2008), and Whose Culture? (2009) ... The four core chapters on the Enlightenment, the Discursive, the Cosmopolitan, and the Imperial Museums had their origins in the 2009 Campbell Lectures at Rice University.

Cuno avoids turning his attention to the issue of antiquities. Yet they lurk on the periphery of his text.

Readers may also be interested in reading my review of Cuno's book at:www.modernghana.com/news/378234/1/affirmations-and-declarations-review-of-james-cuno.html
Kwame Opoku