New Year's Day has given me a chance to respond to Doug Rocks-Mcqueen's "Blogging Carnival" where he posed the theme (for December): the good, the bad, and the ugly of blogging. In May 2009 I wrote on the topic Does Blogging Matter?

The Good
Web 2.0 allows researchers to respond authoritatively to stories as they emerge. Objects can surface in auctions and the blog allows immediate comment. My posts in conjunction with PR Newswire allowed the stories to reach a wider audience and to be picked up by mainstream media outlets.

The blog reaches an international audience. A snapshot from today (perhaps not typical!) suggests that the readership is drawn from the US (41%), UK (18%), Italy (11%), Canada (5%) and including FYROM, Cyprus, Hong Kong and Qatar.

Blogs are beginning to be recognised as an academic and citable resource. LM has had an honourable mention in Archaeological Reports as well as my Outstanding Public Service Award from the Archaeological Institute of America.

LM gives me the opportunity to collect material for my column, 'Context Matters', in the Journal of Art Crime. So a blog allows me to capture information that is noted in newspapers, magazines and new media.

Finally the blog has allowed the creation of virtual research networks with a community of bloggers commenting on similar themes. For example there were some helpful interactions over the bronze Apollo acquired by the Cleveland Museum of Art.

The Bad
Blogging is time consuming. In my previous role where I was contributing to a regular postgraduate seminar on collecting there was an incentive to develop fresh material. But new demands limit the amount of time that can be made available. Is time better spent on something that will appear in print?

There is a sense that the lack of comments suggests that there is little interaction. But how often do I comment on other blogs? I find that I read blogs on the iPad (using Feedly since the demise of Google Reader), and less frequently using 'The Old Reader' on a desk top. And I have also observed that comments are now made on Twitter rather than as a comment on the blog. So is the challenge how to capture all this additional 'chatter'.

The Ugly
Blogging about the antiquities market raises certain uncomfortable questions. A paid Washington lobbyist enjoys making dismissive comments about 'archaeo-bloggers' (even when the archaeologists making the comments can be in tenured university posts). Sensitivities over topics such as Heritage Crime in the UK and the silence from some who record the portable finds shows that blogging can create tensions. I was disappointed to note at a recent conference in UCL that those raising genuine concerns on blogs were being dismissed as 'trolls' (an abuse of the term?). 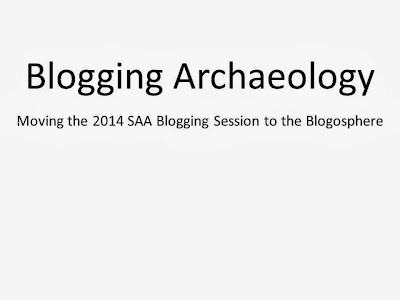