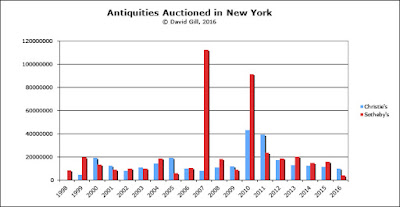 There has been a marked decrease in the value of antiquities sold at auction in New York during 2016. This is partly due to the splitting of sales between London and New York rather than the usual two sales a year. The combined sales of Sotheby's and Christie's in New York for 2016 were half that of the combined sales in both 2014 and 2015.