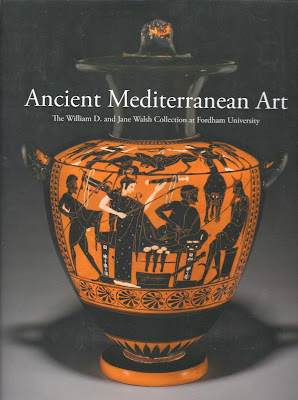 It is being reported that approximately 100 items from Fordham University have been seized (Tom Mashberg, "More Than 200 Ancient Artifacts Are Repatriated to Italy", New York Times December 16, 2021). The items were given to the Museum of Greek, Etruscan and Roman Art in 2007 by William D. Walsh.
The museum has claimed to be 'transparent regarding the objects' provenance or lack thereof' though some of the information, such as the link with Edoardo Almagià has been provided from other sources.
It will be interesting to see which of the Walsh objects have been handed over.

For the press release:
https://www.manhattanda.org/manhattan-d-a-s-office-returns-200-antiquities-to-italy/

"Ninety-six pieces with an estimated value of $1.8 million seized from the Fordham Museum of Greek, Etruscan, and Roman Art on May 28, 2021. Among these items are 26 works of ancient pottery ranging from Apulian Volute-Kraters (large, open-mouthed containers used to dilute wine with water during banquets and symposia) to tall, ancient Roman jars known as Amphora. Highlights include a Baltimore Painter Krater, dating to 330 B.C.E. and valued at $100,000, and a 5thCentury B.C.E. Hydria valued at $150,000. All but two of the pieces seized from Fordham were trafficked by ALMAGIÀ."

The volute-krater attributed to the Baltimore painter came from the New York market, Almagià' in RVAp Suppl. II, no. 27/13a. p. 271. But there is no mention of Almagià in the Fordham catalogue.