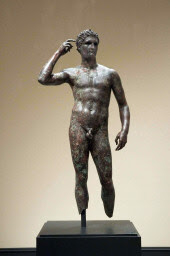 Yesterday was a busy day with the Roman unveiling of the Sarpedon krater and the breaking news that Shelby White had handed over nine of her antiquities (and that one more would follow).

It would have been easy to overlook Thursday's press statement that Italy will continue to seek the return of the Fano Athlete from the Getty ("Italy won't give up on Getty Bronze", ANSA, January 17, 2008).

There had been a legal setback last November when it was reported:

In a statement, Italian Culture Minister Francesco Rutelli said he would await more detail about the ruling before commenting. He has insisted in the past that the Getty should return the statue on moral grounds because it was smuggled out of Italy before the museum bought it.

Clearly Rutelli has now had time to digest the detail and said:

Italy won't give up its claim.