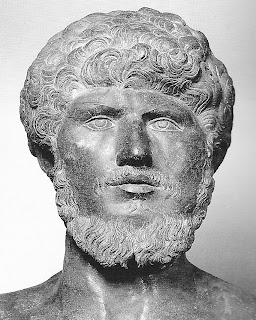 Thomas Hoving helpfully reminded me of the larger than life-size bronze statue of the Roman emperor Lucius Verus in the Shelby White collection (Glories of the Past no. 174). Hoving commented:

The White collection also has a large bronze male statue from Bubon in Turkey, the famous ancient villa exposed when the side of a cliff fell away.

His comment is not exactly correct. Lucius Verus seems to be one of a series of monumental bronze statues displayed, not in a villa, but in the sebasteion, or room for the imperial cult, at Bubon in Turkey.

The portrait of Lucius Verus was first shown in the Indianapolis Museum of Art in 1974. It was owned, prior to Shelby White and Leon Levy, by Mr and Mrs Charles Lipson.

The statue was subsequently displayed in the Harvard University Art Museums at an exhibition, "The Fire of Hephaistos: Large Classical Bronzes from North American Collections" (1996) no. 50.

Indeed the catalogue for "Fire of Hephaistos" notes several other statues in the exhibition that have been linked at one time or another with Bubon (e.g. nos. 16, 19, 24, 38, 44, 55). Peter Watson ("Ancient Art Without a History", The Times [London], August 14, 1997) commented in 1997 that the White-Levy Lucius Verus was"most probably one of 20 lifesize bronze or marble statues that were looted in the Sixties from Bubon".

As I observed with Christopher Chippindale (in the American Journal of Archaeology back in 2000),

Inscriptions allow us to know the identity of the statues that stood here [in the sebasteion] and how they were displayed.

Is this a statue of such importance that it should be displayed in an archaeological museum in Turkey alongside material from its original context? Will Shelby White consider its return?

And what about the other proprietors of statues (and fragments) from Bubon?