A Roman Villa, Coins, and Loss of Context 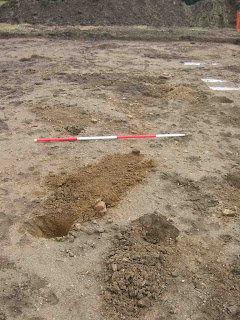 Lindum Heritage have been excavating a Roman villa at Sudbrooke in Lincolnshire. The dig diary is on-line. It includes this telling entry:

We arrived on site to find that we had had a criminal visitor in the early hours. The individual concerned had trespassed onto the site, scanned the open trenches with a metal-detector and dug twenty or so holes into the archaeology to steal metal artefacts from the site ... The loss of the objects - probably of little value as metal does not survive well on the site - is not the most disappointing aspect of this crime; it is the damage that has been done to the archaeological record that is most significant. These objects when recorded in their proper contexts are likely to have provided much valuable evidence about the dating and function of the site - this information is now lost forever. As the finds themselves had been pre-donated to the Lincolnshire archaeological collection and would have been publicly available the theft was actually committed against us all. Even worse the loss of the educational value of the objects is a crime not only against the present generation but against future generations. This is the crime of a particularly immoral and selfish person.

This event clearly illustrates the point that archaeologists have been making in the face of strong criticism from the North American coin-collecting lobby (see "Misunderstanding the Portable Antiquities Scheme?"). The opposition included a comment from Dave Welsh, an officer of the Ancient Coin Collectors Guild (ACCG), who asserted:

The argument that those who go clandestinely prospecting for coins with metal detectors disturb archaelogical [sic.] sites has been convincingly refuted by statistics compiled by the Portable Antiquities Scheme in the UK, which demonstrate that only 2% of reported coin discoveries are made by archaeologists.

Indeed officers of the ACCG seem to be in denial about the destruction of archaeological contexts in the search for new specimens to place in coin cabinets. Perhaps they need to reflect on the irreversible damage to Sudbrooke Roman villa.

I cannot condone the criminal damage cause by this person or persons and am like the majority of metal detectorist in this country law abiding and work very closely with our areas FLO the criminals concerned are labled night hawkers and if we were to discover who they were etc then retribution would be taken, so please donot lable the majority for the sake of the very very small minority.

Thank you for leaving this comment. I was addressing a point made by the ACCG in the USA - and I appreciate that there are many enthusiastic metal detectorists in the UK who are providing information to the PAS.