The Geddes Collection at Bonham's: Publicity 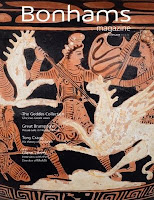 John Boardman has written in the Bonhams Magazine (Autumn 2008), "Urning Respect" (pp. 40-43) [online], in support of the sale of the South Italian pottery from the Graham Geddes collection. Boardman notes the friendship between Dale Trendall and Graham Geddes. He comments that "most [of the South Italian pottery] has been found in tombs, and it is suspected that this was their intended fate". While it is likely that most of these near complete pots have come from tombs, very few have in fact been excavated in a scientific manner; Ricardo Elia has estimated that some 94.5% of all Apulian pots have been deprived of their archaeological context. (Consider the profile of South Italian pottery --- Apulian, Paestan, Lucanian --- in the "Nostoi" exhibitions.) So in one sense "suspect" or guess is all that we can do when it comes to this category of material because so much has been looted. There are over 50 lots (out of 180 [though some have now been withdrawn]) of South Italian pots in this auction.

Chantelle Rountree also writes about the formation of the Geddes collection. She notes the friendship with Trendall, Alexander Cambitoglou and Ian McPhee, and even the creation (by Trendall) of the "Geddes painter". Geddes apparently bought in London and New York from the 1970s onwards (i.e. after the 1970 UNESCO Convention). How many pieces were purchased at Sotheby's in London? Rountree comments on the range of objects in the sale including mosaics (some "Eastern Mediterranean" and mostly from an anonymous European private collection) that "once adorned the floors of Roman villas". But where were those villas located? Or were they bath-houses (e.g. lot 114?), churches (e.g. lot 122?) or other structures? Or has that information been lost?

Now the immediate publicity for the sale is over, it should be possible to take a serious look at the collecting histories of the individual pieces.
- September 26, 2008