Neil MacGregor at the Hay Festival 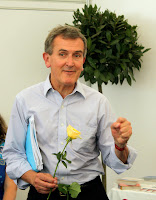 Neil MacGregor spoke fluently and engagingly at the Hay Festival today about BBC Radio 4's series, 'A History of the World'. His starting point was an illustration of some pot sherds from Kilwa in Tanzania. These pointed us to China and the Persian Gulf. His emphasis was on how objects can help to write history.

A major theme of his talk was the enlightenment ideal. His second illustration was an Asante drum acquired in West Virginia. However recent study has shown that it was created in West Africa. How did it get to North America? MacGregor emphasised that the drum has a 'trajectory of meanings'. He argued that its appropriate home was in the cosmopolitan community of London.

This moved us into a North American buckskin map showing dating to 1774-75. This still had two neat holes where the animal had been shot through the right shoulder. The inks used were derived from European sources.  MacGregor explored the issue of mapping and control.

He then turned to Captain Cook and the Pacific with a Hawaiian feather helmet. From the there he showed what was probably the first object to be collected by a European in Australia: a eucalyptus bark shield from Botany Bay.

MacGregor closed with a consideration of a jade bi with poem from Beijing. 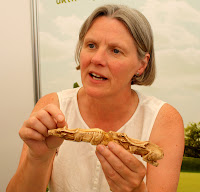 A member of the audience did ask about the repatriation of objects. MacGregor repeated the position of the universal museum and cited the Parthenon sculptures.

The museum had brought along a number of objects from the series (complete with curatorial staff) to one of the stands at the Festival. I even managed to hold early tools from the Olduvai Gorge.

This was an excellent event and deliberately moved the focus away from the Mediterranean to place the British Museum's objects in a world setting.