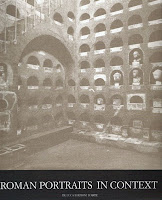 It is good to see that North American museums have been receiving a number of loans from Italy in the wake of the return of some 130 or so "recently-surfaced" antiquities. The most recently heralded example is from the Cleveland Museum of Art (Steven Litt, "Cleveland Museum of Art's new galleries include antiquities on loan from Italy", cleveland.com June 20, 2010). The details are outlined:


The fruits of this agreement -- four objects from archaeological museums in Reggio Calabria and Paestum -- will go on view in the newly reinstalled galleries of ancient, African and medieval art, which open Saturday.

One of the objects is an enthroned female statuette, made in terra cotta -- a fired, red-orange clay. Another is the head of a Kore, an ancient Greek maiden, made in a refined, pinkish-yellow form of terra cotta.

Also on view are a cast bronze mirror emblazoned with a winged siren, and a terra-cotta plaque depicting Persephone and Hades enthroned with clusters of flowers and wheat.

Dating from 500 to 400 B.C., the works all stem from a period when Greece colonized Sicily and coastal regions of southern Italy, leaving a deep imprint on the native Etruscan civilization and later on the Roman republic and empire.

Other AAMD collections to benefit from the scheme include Boston's Museum of Fine Arts and New York's Metropolitan Museum of Art.

One of pioneers in this field was Maxwell L. Anderson with his EUMILOP project back in the 1980s. I note that the Indianapolis Museum of Art (where Anderson is now the director) has now received a number of loans from Italy (press release):


the objects include three life-size portrait busts and a marble funerary urn from the Vigna Codini Columbarium II, a major Roman tomb discovered in 1847.

This group of material was the subject of the Roman Portraits in Context Exhibition at Emory University in 1988-89 (complete with excellent catalogue).

Anderson repeats his position from the late 1980s:


American museums have few examples of ancient art which can be displayed with their complete context understood ... The Vigna Codini Tomb contents from the Julio-Claudian and Flavian periods open a window to understanding that only long-term loans can provide, since the acquisition of archaeological material with inadequate ownership history is no longer acceptable.

It is good to hear somebody who clearly understands the issues about acquiring recently-surfaced antiquities.