The loan of Castor and Pollux 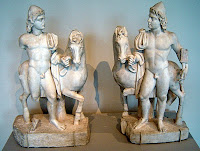 In 2006 the Association of Art Museum Directors (AAMD) issued new guidance on loans of archaeological material and ancient art (see earlier comments). I have been interested in the loan of the "Roman marble statuettes of Castor and Pollux" to New York's Metropolitan Museum of Art (L.2008.18.1, .2). I made a formal enquiry about the collecting history for the pair from Tom Campbell and he kindly asked the Greek and Roman department to let me have the information.

A member of the department sent me details derived from when the pair passed through the Royal-Athena Galleries (Art of the Ancient World XII [2001] no. 12): "The provenance of the two Roman works on loan to the Museum is well known and published". The catalogue informs us that the statues were "probably from the Mithraeum in Sidon, excavated in the 19th century". The collecting history is laid out: "ex private collection, Lebanon; Asfar & Sarkis, Lebanon, 1950s; George Ortiz Collection, Geneva, Switzerland; collection of an American private foundation, Memphis, acquired in the early 1980s".

At some point the statues passed through the Merrin Gallery where they were published by Cornelius C. Vermeule, in Re:Collections (Merrin Gallery, 1995).

I have now asked a further question ("What is the basis for saying that the pieces were in a Lebanese private collection, and that they passed through Asfar & Sarkis in the 1950s?") and await a reply.

As this collecting history information is said to be "well known and published", I look forward to receiving a response in due course.