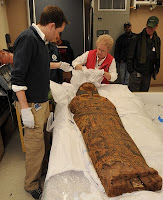 Earlier this week I drew attention to a draft paper by Stephen K. Urice and  Andrew Adler where they discuss the Egyptian coffin seized in Miami. The suggested that the collector was Joseph A. Lewis III.

I note that in 1991 a Joseph A. Lewis II from Richmond Va. and an unnamed co-conspirator were "charged in federal court with illegally importing Australian wildlife into the United States" ("Lizard Case in Va. Court", The Washington Post August 3, 1991). The wildlife consisted of "exotic lizards ... including Shingle-Back skinks and Bearded Dragon lizards". The report continued:


As part of the alleged conspiracy, the unnamed co-conspirator would travel to Australia and obtain live reptiles, an act that is illegal in Australia. The co-conspirator then would send the reptiles back to the United States in certain mail parcels.

To avoid scrutiny of U.S. Customs officials, the contents of the packages were falsely labeled, authorities said.


A man has been convicted in the US of trafficking in exotic Australian lizards.

Joseph Lewis, an executive of a cosmetic firm in Richmond, Virginia, was convicted of conspiracy to import shingleback skinks and bearded dragon lizards from Australia.

Allen Hundley, of the US Fish and Wildlife division of law enforcement, said yesterday: "It was a big business, well-organised."

Hundley said evidence before the court in Richmond showed Lewis had conspired with others to import three packages into the country from Australia. Those packages contained eight shingleback skinks and 10 bearded dragon lizards.

According to court documents, in the mid-1980s Lewis ran a business from the basement of his home called Universal Select Animals.

The company was "engaged in buying, selling and trading in exotic, rare and protected reptiles."

Lewis pleaded guilty and was fined the equivalent of $9,400, ordered to perform 300 hours of community service and given 30 days of home confinement for his crime.

Two Californian men have also pleaded guilty to charges in connection with the case.