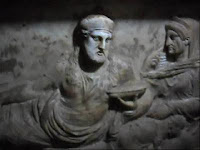 It appears that the tomb of Hecatomnus, satrap of Caria, has been "discovered" by looters near the ancient site of Milasa in western Turkey ("Illegal dig leads to ancient king's tomb", UPI August 5, 2010; "Illegal excavation reveals an important discovery", Hürriyet Daily News August 8, 2010). Hecatomnus is important as he was the father of Mausolus whose monumental tomb was one of the wonders of the ancient world.

Among the 'finds' was a relief sculpture showing a banquet scene.

Apparently the looting team consisted of at least eight individuals. Several arrests have been made.

This is a good reminder that sensitive archaeological sites, even ones of major historical significance, are being looted to provide objects for the international market in recently-surfaced antiquities.

Email ThisBlogThis!Share to TwitterShare to FacebookShare to Pinterest
Labels: Turkey

Worth to check details of the reliefs, wall paintings and the extremely fine masonry on the passageway leading to the burial chamber. Although, many details would be lost, but online translation sources may be used for following the Turkish texts accompanying the web pages cited above.

Video footage of the monument taped by the looters and distributed to the press by the Police Department.