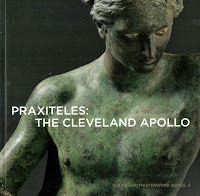 Michael Bennett has decided to provoke the Republic of Turkey's attempts to claim material in Cleveland. Perhaps he could have had a full discussion of the looting of the temple linked to the Roman imperial cult at Bubon in Turkey. What would Bennett says about Cleveland's Marcus Aurelius?

Perhaps Bennett's less than gracious attack on Turkey will encourage the Turkish authorities to renew their interest. Steven Litt, in an article that does not appear in Bennett's bibliography, reminds us of the range of material that appears to have been derived from Turkey.

More discussion can be found at Chasing Aphrodite.

Bennett's Praxiteles is certainly reopening lines of enquiry that had lain dormant. We should be grateful to him.