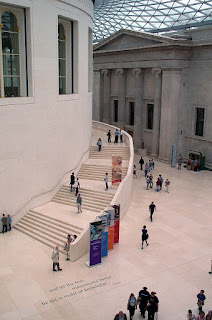 I was browsing through the Spring/Summer number of the British Museum Magazine and spotted a half-page advertisement for Rupert Wace Ancient Art (RWAA) complete with a headless Hellenistic marble Aphrodite.

There is a short statement about the appearance of such advertisements in the Magazine:

It is the policy of the British Museum Friends to accept antiquities advertisements only where we receive assurance from the advertiser that the illustrated object is documented to have formed part of a legitimate collection prior to 1970.

Perhaps the centrepiece of the exhibition is the marble figure of Aphrodite. The goddess of love is shown turning towards us, shielding her nakedness as if surprised by our presence. The type, known as the Aphrodite of Knidos, is, with the Laocoon, one of the most famous sculptures of the ancient world. Copied throughout antiquity, it is also a corner-stone in the history of classical art. The original was so famous that Pliny describes it as a tourist attraction. Although there were numerous representations of nude men, soldiers, athletes and gods from the Archaic period onwards, this was the first Greek female nude. She pretends to be demure and tries, very ineffectively, to cover her modesty but this is an act in order to captivate the male observer. This example comes from a private UK collection, acquired between 1968 and 1978.

I ask because Wace has in the past used "private collection" as a euphemism for a Paris-based syndicate of auctioneers. (For the background on that case: Brian Handwerk, "Egypt's Antiquities Chief Combines Passion, Clout to Protect Artifacts", National Geographic News, October 24, 2006; and see key statement from Zahi Hawass.) Indeed, in an unrelated (but relevant) case, the holdings of Robin Symes have been presented by one scholar as part of a UK "private collection".

And if the Aphrodite could have been acquired by the "private UK collection" between 1970 and 1978—as the press release indeed implies—what sort of assurances about its documented history were given to the officers of the British Museum Friends? Or is it certain that the Aphrodite was acquired in either 1968 or 1969, and somebody forgot to update the press release (in the way that they forgot to change the exhibition title)?

Can we assume that somebody from the Magazine sought an assurance? Or did the staff of the Magazine hope that nobody would notice?
- April 23, 2008