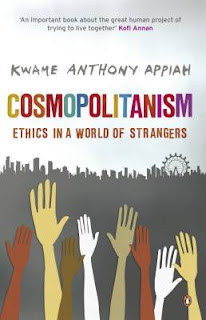 Kwame Anthony Appiah, the Laurence S. Rockefeller University Professor of Philosophy for the Center for Human Values at Princeton University, now features regularly in discussions of cultural property (see Philippe de Montebello in "An Era of Scrupulous Acquisition Policies"). Appiah addresses cultural property in a chapter, "Whose culture is it, anyway?", in his excellent Cosmopolitanism: Ethics in a World of Strangers (2006).

Appiah understands some of the issues raised by archaeologists. In his discussion of terracottas from Mali he accepts the intellectual consequences of the desire to own these "wonderful sculptures". He comments:

They were sold to collectors in Europe and North America who rightly admired them. Because they were removed from archaeological sites illegally, much of what we would most like to know about this culture—much that we could have found out by careful archaeology—may now never be known.

Such a position is equally true for marble Cycladic figures from the Aegean or Athenian sympotic pottery placed in funerary contexts in Tuscany.

Appiah also raises the issue of material stolen from museums in Nigeria: he suggests "hundreds of millions of dollars worth of art".

But can you group Mali terracottas and museum objects from Nigeria?

If archaeologists are concerned about intellectual consequences of looting, can "cultural patrimony" take second place? Appiah makes the point that Nok sculpture pre-dates the creation of modern Nigeria. Let me give a further example. The Sarpedon krater was made before the foundation of the modern Greek (it was made in Athens) or Italian (it was probably found in Italy) states. But Italy has the incentive to ask for the krater back because its return is a disincentive for future similar acquisitions. Why? Because such material often (but not always) comes onto the market through the looting of archaeological sites. (See my comment on a proposed "licit trade" in antiquities.)

I get the impression that Appiah would argue that the Sarpedon krater is part of our "cosmopolitan" heritage. Its iconography and design speak to our contemporary world culture. It makes a visual impact whether it is displayed in New York or Mantua. By the same token, its illegal and unscientific removal from its (Etruscan?) context has robbed a little bit of knowledge from the "cosmopolitan" viewing public.

And I am sure Appiah understands this. He writes:

For an object from an archaeological site, after all, value comes often as much from the knowledge to be gleaned by knowing where it came out of the ground, what else was around it, how it lay in the earth.

So is one outworking of cosmopolitanism an increasing awareness of a shared heritage and the need to preserve and secure archaeological contexts for the benefit of all?
- April 16, 2008