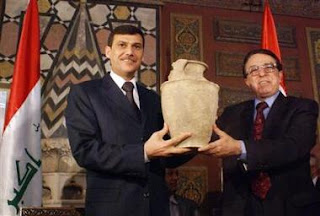 Syria on Wednesday returned to Iraq around 700 pieces of antiquities, including gold coins and jewellery, which were stolen in the aftermath of the US-led invasion of its neighbour.

Culture Minister Riad Naassan-Agha handed over the artefacts to the minister of state for tourism and archaeology, Mohammed Abbas al-Oraibi, at a ceremony at Damascus national museum.

"These objects stolen in Iraq were seized by Syrian customs officials," Naassan-Agha said, according to the official SANA news agency, adding that other "very precious" artefacts will be returned soon.

Image
Syrian Culture Minister, Riyadh Na’ssan Agha, right, at the National Syrian Museum in Damascus, hands back to Iraq's state minister for tourism and antiquities affairs, Mohammad Abbas al-Oraibi, one of some 700 Iraqi antiquities which have been in the care of Syrian authorities. [Source]

Email ThisBlogThis!Share to TwitterShare to FacebookShare to Pinterest
Labels: Iraq

Today, CNN posted a video on the returned antiquities (http://www.cnn.com/video/#/video/world/2008/04/27/damon.iraq.recovered.treasure.cnn). I also discuss it here: http://coinarchaeology.blogspot.com/2008/04/cnn-coverage-of-syrias-return-of-iraqi.html