Antiquities Waiting to be Returned to Greece? 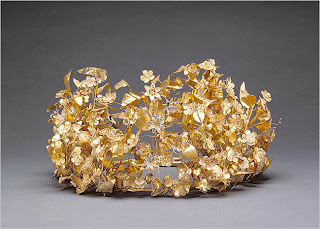 The return of antiquities to Italy has been setting the agenda for discussion. The Polaroids seized in Geneva gave an advantage to the Italian negotiating teams.

But we also know that a set of Polaroids were handed over to Yiannis Diotis, the Greek prosecutor in 2005 (Nikolas Zirganos and Daniel Howden, "Greece and Italy team up to recover stolen antiquities", Independent, February 24, 2006). Zirganos and Howden reported

These images are said to include scores of ancient works, looted from Greece and sold to wealthy private collectors or major museums. The items were photographed while in the possession of crooked dealers and circulated to potential buyers, typically, before being sold through Swiss auction houses which operate outside EU laws on trafficking in stolen goods. Mr Diotis will now spearhead the effort to trace the pictured items, said to include priceless statues, vases, ornate wreaths and sculpted reliefs.

So what is happening to the Greek investigation?

Three items mentioned in the report by Zirganos and Howden have since been returned from the J. Paul Getty Museum:
No doubt there have been distractions for Diotis such as the raid on Schoinoussa in which some 142 items were seized (Nicholas Paphitis, "Senior prosecutor takes over Greek island villa antiquities investigation", AP, April 14, 2006). But more than two years have elapsed since the Greek authorities were given the Polaroids. How many pieces have been identified? Have negotiations started?