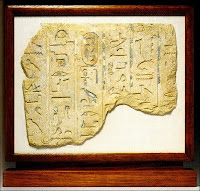 Back in May I commented on the fragment from the Tomb of Mutirdis (TT410) that had been withdrawn from a sale at Bonhams (London). It is now reported that the piece has been returned to Egypt ("Egypt retrieves a 2,500-year-old stone relief from Bonhams auction house in London", IHT, June 30, 2008)

"We were alerted by the Metropolitan Museum of Art (in New York) that this item had apparently been seen in a tomb that someone at the Met had been involved in the excavation of ... It has now been repatriated, as we always try to do in these situations ..."

Roup would not identify the seller who tried to put the artifact up for auction, but said it appeared to have been bought "in good faith."

The piece is said to come from an Australian seafaring collection. And there are still some unanswered questions about the due diligence process.
- June 30, 2008