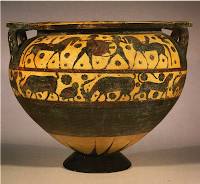 Yesterday's announcement about the return of antiquities from Cleveland to Italy presented a rather mixed bag. But Elisabetta Povoledo ("Pact Will Relocate Artifacts to Italy From Cleveland", New York Times November 19, 2008) has indicated that two further pieces are under consideration.

Yet not all has been resolved. A committee will be set up to discuss two other objects in Cleveland: a first-century chariot attachment depicting a Winged Victory with a cornucopia, and a renowned fourth-century B.C. bronze statue of Apollo slaying a lizard, which the museum attributes to the classical Greek sculptor Praxiteles.

The Roman bronze Victory with Cornucopia, Roman (1984.25) is known to have “traveled through the art market and conceivably found with [63-65]” (Gods Delight, no. 66). The three other pieces, nos. 63-65 in the exhibition catalogue are now in the J. Paul Getty Museum. So discussions with Italy have implications beyond Cleveland.

The Apollo has been the subject of previous comment.

Mr. Rub said the museum acted in good faith when it acquired the pieces, but when presented with evidence of problems, it resolved to “honor our obligation to acquire in a manner that is ethical and transparent” and returned the works “to their rightful owner.”

As the museum acted in good faith, why is the museum refusing to provide the sources for the pieces?

Rub said the agreement with Italy is based on the understanding that neither the museum nor its directors or curators are in any way tainted by the return of objects.

Instead, Rub said, the understanding is that the museum innocently acquired objects that "clearly were associated with bad actors" at some point in their past.

The majority of the objects were purchased between the 1970s and the 1990s. Rub declined to give names of dealers involved in the histories of the objects.

I am left puzzled by this. Did the curatorial staff at Cleveland not have any suspicions if the objects had no recorded histories prior to 1970? And would the disclosure of the names of dealers help to close this disturbing period for American museums? Are other museums in North America, Europe and the Far East holding material from the same sources? Disclosure would help other museums to re-examine their due diligence processes.

In terms of other museums' behavior, supposedly the Getty Museum was awfut but the Boston Museum of fine arts was great--that's what I read in this article [http://tinyurl.com/6zgdly] which also links to some of the history on looting.

Another good site is PBS...http://www.pbs.org/newshour/bb/europe/jan-june08/returnhome_02-18.html it's an interview with Italy's minister of culture.