Increase in the Reporting of Portable Antiquities 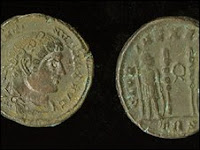 In total, the number of finds containing gold and silver which were reported by the public rose by more than a tenth last year.

The Treasure and the Portable Antiquities Scheme said it was partly down to the popularity of metal detectors, but also because more people are reporting what they have found.