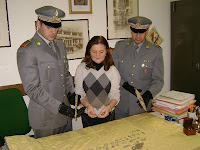 Among the objects found at the house near Modena were two rare pre-Medieval weapon tips, one from a javelin and one from a lance, several Roman coins from the pre-imperial era, and Longobard (Lombard) and Goth buckles. A fragment of a votive vase from a Greek colony in southern Italy was dated to the sixth century BC.

Email ThisBlogThis!Share to TwitterShare to FacebookShare to Pinterest
Labels: Italy