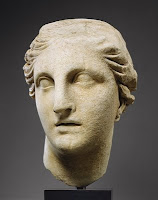 Some of the pieces come from old collections. Take, for example, the Attic red-figured plate with the "signature" of Epiktetos as "painter" (inv. 1981.11.10). Its history is given as:

It was then purchased by The Bothmer Purchase Fund, and Norbert Schimmel Foundation Inc. and Christos G. Bastis Gifts, 1981.

Among the other acquisitions was a Roman statue of Pan (inv. 1992.11.71). Its collecting history is given as:

Which European private collection? Which market? Is any of this history documented?

Where was the marble head prior to 1991? Had it, too, resided in some old European collection?

Robin Symes also presented a terracotta figure to the MMA (though it does not feature in the exhibition).