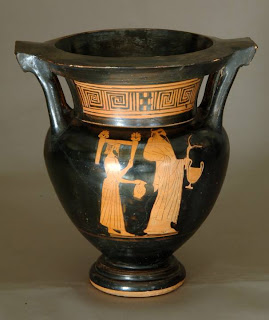 The neck-amphora (a) appears to be listed on the database of the Beazley Archive as surfacing at Sotheby's in London (17-18 July 1985, lot 257). It then passed through Galerie Günter Puhze in Freiburg, and was in the hands of the Royal-Athena Galleries in 1992.

The hydria (b) is listed on the database of the Beazley Archive. It surfaced in the Royal-Athena Galleries in 1990.

The column-krater (c) appears to be listed on the database of the Beazley Archive as surfacing at Sotheby's in London (14 December 1987, 295). It subsequently featured in the Royal-Athena Galleries catalogues in 1991 and 2006.

The three Etruscan bronzes had all apparently been stolen from museums in Italy:

Lee Rosenbaum had in fact already anticipated this announcement in her posting back in June ("Italian Criminal Charges Possible in Connection with Antiquities Recovery from Private Collector; Accord Reached with Princeton Museum", Culturegrrl, June 28, 2007). She noted,

Giovanni Nistri ..., commander of the carabinieri's special unit for cultural patrimony, told me that two of the recovered objects---a ... bronze Etruscan figure of a nude athlete, and a ... bronze Etruscan figure of Nike, had been discovered by Italian investigators on the website of Eisenberg's Royal-Athena Galleries, which voluntarily restituted them when shown evidence of their theft from an Italian museum and an archeological site, respectively. Nistri explicitly stated that Eisenberg had had no prior knowledge of the works' problematic histories and had cooperated in their restitution.

Eisenberg told me [sc. Rosenbaum] that he had sold the bronzes in the 1980s to collector John Kluge, who put them up for auction at Christie's on June 8, 2004. Eisenberg repurchased them there (for $6,573 and $9,560, respectively). He said that he had also voluntarily returned other pieces, when he learned that they had been illegally taken from Italy.

Eisenberg should be praised for these returns. But it confirms that some items that passed through Sotheby's in London during the mid-1980s (and exposed in Peter Watson's Sotheby's: Inside Story [1997]) were derived from looted archaeological sites in Italy. And what other potentially looted material was also moving through the market in the same way?