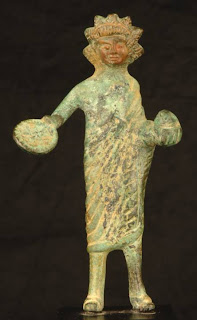 On Saturday I commented on the return of eight antiquities to Italy by Jerome Eisenberg. In it I posed the questions:

What was his due diligence process? Had he consulted and obtained clearance from the Art Loss Register?

Dr Eisenberg has responded to me (and his letter has been attached in full to the original posting). He leads with this statement:

It should be brought to your attention that the Art Loss Register was not established until 1991.

He is right (see ALR website) though there was an earlier archive established by The International Foundation for Art Research (IFAR) in 1976. I must apologise for giving a misleading impression.

The earlier history for six of the eight antiquities is available:

Dr Eisenburg would not have been able to check the histories of these six objects with the Art Loss Register (ALR) as the Royal-Athena Galleries acquired them before the formation of that organisation in 1991. (I include within the six the neck-amphora and the column-krater that were in his possession by 1991 and 1992.)

I do not know when the Royal-Athena Galleries acquired the other two pieces.

However some of the pieces were in the possession of Royal-Athena Galleries after 1991 and the creation of the Art Loss Register. The column-crater (Beazley Archive no. 19523), for instance, featured in a 2006 catalogue (Art of the Ancient World vol. 17).

Lee Rosenbaum ("Italian Criminal Charges Possible in Connection with Antiquities Recovery from Private Collector; Accord Reached with Princeton Museum", Culturegrrl, June 28, 2007) has commented specifically on two of the bronzes (the Nike and the athlete):

Eisenberg told me [sc. Rosenbaum] that he had sold the bronzes in the 1980s to collector John Kluge, who put them up for auction at Christie's on June 8, 2004. Eisenberg repurchased them there (for $6,573 and $9,560, respectively). He said that he had also voluntarily returned other pieces, when he learned that they had been illegally taken from Italy.

The Royal-Athena Galleries are members of the International Association of Dealers in Ancient Art (IADAA). Their "Code of Ethics and Practice" states:

All members undertake to check objects with a purchase value of Euro 3000 or over (or local currency equivalent) with the Art Loss Register unless the item has already been checked.

Did the Royal-Athena Galleries consult the ALR database once the bronzes had been re-acquired? Or was the fact that they had owned the pieces back in the 1970s or 1980s deemed to be sufficient? Or had Christie's run a check on the bronzes prior to the 2004 sale?

I have commented elsewhere on the use and limitations of the ALR ("The Art Loss Register and Antiquities").

A question: are objects that are circulated, bought, sold and re-sold, between dealers and collectors reevaluated each time they become available on the market? Just a thought.