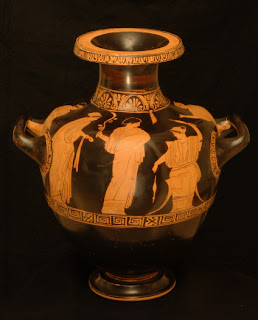 Jerome Eisenberg has liked to present himself as a pro-active dealer of antiquities. The website of the Royal-Athena Galleries tells us:

Since 1954, [Eisenberg] has made nearly 200 overseas trips, purchasing many thousands of works of art for tens of millions of dollars.

This aggressive purchasing policy, perhaps without parallel in the field, enables us to offer an extraordinary number of choice objects at very reasonable prices.

This "policy" contrasts with the actions of the Italian authorities:

Italy has been aggressively seeking the return of looted antiquities it says were smuggled out of the country and sold to top museums and collectors worldwide.

Eisenberg has clearly changed his position since his comments that the Italian attempts to restrict the movement of cultural artefacts to the USA were "absurd" and "oversimplified" (Guy Gugliotta, "Policing Plunder, Italy Requests U.S. Help in Stemming Loss of Its Antiquities", Washington Post, October 11, 1999 [archived]).

Eisenberg commented on one of these items when the return was announced in September 2006 (Geoff Edgers, "MFA returns art to Italy, paves way for collaboration", Boston Globe, September 29, 2006):

None of these are monumental works of art, and what fuss are [Italian audiences] going to make about this vase? ... Far more people will see it at the MFA.

What can we learn from these cases?

The fallout from the selling activities of Sotheby's in the 1980s is still with is. Three items (see also "Jerome Eisenberg returns antiquities: further details") purchased by Eisenberg from the auction house in London in 1984 (December), 1985 (July), and 1987 (December) appear to have derived from an illicit source (as they have had to be returned to Italy). Peter Watson (Sotheby's: Inside Story [1997]) has noted:

The printout showed that this company, Christian Boursaud, consigned for sale in the July 1985 auction some 104 unprovenanced antiquities.

in the December 1987 sale which consisted of 360 lots, 101 were sent in by Editions Services. Once again, none of these antiquities had any provenance and again the shipment included twelve Apulian vases.

What other items purchased at these sales at Sotheby's will be pursued by the Italian authorities?

I close with some prophetic words written by Eisenberg in 1995:

Though I have never purchased an antiquity in Greece, nor in Italy since 1971, nor in Egypt since 1966, I am perhaps, unfortunately, at the same time, a hypocrite, since I have no doubt unknowingly bought a number of objects legally from galleries and auction houses throughout Europe, especially in England, that might have once been exported illegally from their country of origin.