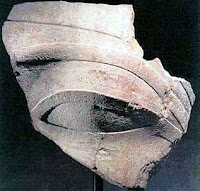 The eye of a statue of Amenhotep III from his mortuary temple near Luxor was returned from Switzerland on Thursday October 23, 2008. The piece had apparently formed part of the Norbert Schimmel Collection and then passed through various hands before being acquired by the Antikenmuseum in Basel [see earlier posting]. The identities of the Swiss collector and the German dealer have not been revealed. (They may, indeed, be one and the same.)

What is more interesting is the statement from the Egyptian State Information Service ("Amenhotep's eye back to Cairo from Switzerland", October 24, 2008):

The Swiss President had said his country gave back to Egypt one thousand pieces of antiquities.

What about these 1000 pieces? Were they returned from museums, private collectors or dealers?