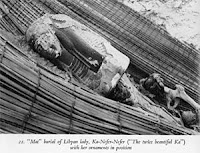 I have commented on the Egyptian mask that somehow has moved from the store at Saqqara to the St Louis Art Museum (SLAM). My attention has been drawn to the significant study: Laura Elizabeth Young, "A Framework for Resolution of Claims for Cultural Property", MSc in Arts Management, University of Oregon, December 2007 [pdf]. Chapter 3 includes a case study on the SLAM mask. There appears to be little doubt that the mask was excavated at Saqqara in early 1952 by Mohammed Zakaria Goneim (d. 1959), then chief inspector of antiquities [image].

SLAM's view of the mask's subsequent history appears to be based on a narrative supplied by the seller, Phoenix Ancient Art, S.A. But is there any secure documentation for the mask before it came into the possession of the dealer in 1997? The account provided by Zahi Hawass seems to undermine the version of the story that the mask was in Brussels in 1952. Indeed he makes the forceful claim: "the central issue is that there are no circumstance under which the mask could have reached your museum [sc. SLAM] legally".

Relevant documents (including images of correspondence from Hawass and responses from SLAM) are included in Young's work. Brent Benjamin's defence of the acquisition is criticized by Young: "The St Louis Art Museum's efforts of due diligence inquiry prior to purchase of the Ka-Nefer-Nefer mummy mask are criticized in this research since minimal efforts were taken to establish the facts of the case, particularly in identifying the source and history of the object prior to purchase."
- October 02, 2008