Knidos: Possible Request for the Return of Sculptures 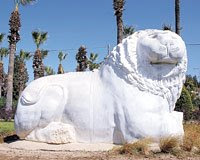 There are reports in the Turkish media that the town of Datça in western Turkey will be making a formal request for the return of sculptures removed from the site of nearby Knidos ("Datça to seek return of ancient sculptures", Today's Zaman October 23, 2008). Among them is a colossal lion and a statue of Demeter both now in the British Museum.

Some of the sculptures were removed by Charles Newton in the spring of 1858 (details in Debbie Challis, From the Harpy Tomb to the Wonders of Ephesus [2008]). As the newspaper report comments, "It was not taken without permission, as unfortunately the Ottoman palace consented to it". In other words, a firman had been granted by the Ottoman authorities for Newton's activities.

The British Museum is a partner in the renewed excavations at Knidos.