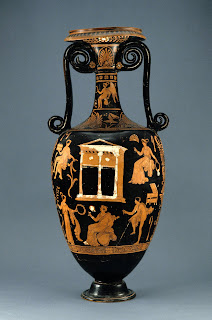 James Cuno has been raising some key issues about the acquisition of antiquities. I was struck by his reaction to the 1983 US Congress implementation of the 1970 UNESCO "Convention on the Means of Prohibiting and Preventing the Illicit Import, Export and Transfer of Ownership of Cultural Property".

These actions have been taken to enforce foreign nations' retentionist cultural policies at the expense of the Enlightenment principles on which public museums in the United States were established. [p. 144]

Is it "enlightened" to reject the desire for countries to protect their cultural property and archaeological sites?

Is it "enlightened" to ignore the material consequences to the archaeological record?

Is it "enlightened" to fail to see the intellectual consequences of acquiring newly surfaced antiquities that have no recorded find-spots?

This is not just about acquisition but also the safeguarding of a finite archaeological resource.

Does it matter in our cosmopolitan world if an Attic krater is displayed in Minneapolis or Rome? Or an Athenian marble relief in London or Athens? Or a Cycladic figure in Paris or the Naxos Museum?

At one level the answer is no. If the find-spot is known it makes no difference to the interpretation of the object if the item is on view in Berlin or Istanbul. And if the find-spot is lost, "returning" the item will not restore its context. Cuno makes the helpful observation:

But when an antiquity is offered to a museum for acquisition, the looting, if indeed there was any, has already occurred. Now the museum must decide whether to bring the object into its public collection, where it can be preserved, studied, and enjoyed, and where its whereabouts can be made widely known. Museums are havens for objects that are already, and for whatever reason, alienated from their original context. [p. 155]

And this brings me back to my series of questions, and which is why at another level I would have to answer, "yes, it does matter where objects are displayed".

Take the massive rise in the number of previously unknown Apulian pots available at auction through the 1980s and 1990s. Their appearance is directly linked to the deliberate destruction of funerary contexts in southern Italy to supply a market. And the buyers have been public institutions and private collectors. So it does matter if there is active acquisition of Apulian pots because there is a material implication for the funerary record (see "An Italian Cavalryman in Manhattan") and an intellectual implication for their interpretation.

Discouraging the acquisition of Apulian pottery unknown prior to 1970 is one way to discourage looting. The pieces of Apulian pottery attributed to the Darius painter and returned to Italy from Boston, Malibu, Princeton, as well as New York, have lost their contexts; but their transfer of ownership will probably make those museums think twice about acquiring newly surfaced Apulian material.

Cuno would, no doubt, argue that the contexts had been lost: so does acquisition matter? But when we realise that these returning Apulian pieces are associated with individuals and galleries such as Giacomo Medici, Fritz Bürki, Robert Hecht, and Atlantis Antiquities, it can be appreciated that these are unlikely to be chance finds.

And I am left thinking that the "Enlightenment principles on which public museums in the United States were established" have perhaps contributed to the irreversible destruction of our universal, or cosmopolitan, cultural heritage.

Red figure loutrophoros (ceramic), attributed to the Darius Painter. South Italian, Apulian, ca. 335-325 B.C. One of four objects to be transferred in title to the Italian government but to remain on loan to the Princeton University Art Museum.
- March 05, 2008