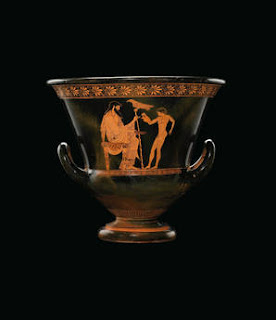 The antiquities returned to Italy by Shelby White have now gone on display in the Palazzo Poli (Fontana di Trevi), Rome and a short statement has been issued by the Ministero per i Beni e le Attività Culturali (MiBAC) (see also Elisabetta Povoledo, "Repatriated Art in Rome", New York Times, March 29, 2008).

There is a short quotation from Shelby White:

She stresses several things. First, that the sources for her antiquities were public auctions or antiquities dealers who were considered "trustworthy". We now know that the dealers included Robin Symes and the auction houses, Sotheby's in London. Second, that this return was a voluntary arrangement. Third, that the evidence was such that it demonstrated that the objects had been removed from Italy in a possibly contentious way.

Certainly there has been no resort to legal action to have these objects returned.

Essentially Shelby White's position is this: she is a supporter of archaeology through excavations, publications, research and exhibitions. We need to hope that she will now concentrate on these core activities. However she still owns a collection of antiquities, some on loan to major public collections.

The MiBAC statement does not include the objects, so for completeness here they are (and see also my earlier list though there is one surprise addition and some missing items):
The tenth item (that will follow later):
It is reported that there were originally more than twenty items on the Italian list. The returning objects do not include two items known to be among those illustrated in the Geneva Polaroids (and listed in P. Watson and C. Todeschini, The Medici conspiracy: the illicit journey of looted antiquities from Italy's tomb raiders to the world's great museums (New York: Public Affairs 2006]):
The neck-amphora attributed to the Bucci painter is not without interest as it appears to be the amphora consigned to Sotheby's by Christian Boursaud (Peter Watson, Sotheby's, the inside story [London: Bloomsbury, 1997] 118):

It also was discussed at length by Chippindale and Gill ("Material consequences of contemporary classical collecting," American Journal of Archaeology 104 [2000]: 493-94 [JSTOR]). Why has it been retained?

I have now received the official English language press statement and add it here for convenience:

Shelby White and her late husband Leon Levy have long supported archaeological excavations, publications, conservation and exhibitions in countries around the world. Ms. White stated that “Our collection was purchased at public auction and from dealers we believed to be reputable. In the case of the objects I have voluntarily offered to return, I believed the evidence was sufficient to suggest that their export from Italy was questionable.”

In recognition of the policy of the Italian State to recover archaeological objects and to promote and protect the optimum utilization of Italian cultural heritage, Ms. Shelby White has shown great sensitivity and taken the initiative voluntarily to offer to return ten items, including the Euphronios Krater from her own collection to the Italian State.

The objects were consigned to Italy through its Consulate in New York early this year.

The Ministry, in accepting the offered items, acknowledges that it has neither evidence, nor legal claim that Leon Levy nor Shelby White acted unlawfully or improperly in acquiring these objects. Both sides express their satisfaction at the successful outcome of the negotiations.

Lee Rosenbaum has commented on the above list and wondered if there were differences with the (subsequent) MiBAC list. I have re-posted the Shelby White list with the Italian titles.
http://lootingmatters.blogspot.com/2008/04/nostoi-capolavori-ritrovati-exhibition.html.

Images of the pieces can be found at:
http://www.artsjournal.com/culturegrrl/2008/04/the_shelby_white_files_images.html#more.