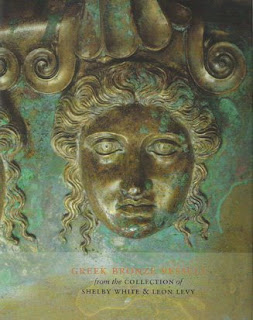 Shelby White likes to present herself not just as a collector but as "a guardian" of antiquity. I have been using the beautifully produced catalogue of Greek bronze vessels from the collection of Shelby White & Leon Levy (2005). One of the pieces was first published in 1955; others surfaced more recently (but all after 1970); three appear here for the first time.

There are ten entries (and some of the pieces have appeared in the exhibition "Glories of the Past" (1990); the full bibliography for each piece is not provided here).
There is little about the find-spots, except for the griffin protome (no. 2) which is reported to have a find-spot at Olympia. Take the North-Eastern Greek bronzes (no. 1). Glories describes the entry as "Part of a find" and in the catalogue entry (by Dietrich von Bothmer) it is noted:


The armlet, pyxides, and oinochoe once formed part of a much larger hoard, comprising forty bronze objects and one gold pectoral, known only from an old photograph.

Von Bothmer places them firmly in northern Greece: "these primarily Macedonian objects". The new catalogue merely notes that such bronzes were "destined ultimately for the tomb where they were placed in large numbers"; the hint at Macedonia is given by the oinochoe for which the spout "is typical of oinochoai found in the Chalkidike". And how old is the photograph? Who took it? Who supplied it?

The trefoil oinochoe (no. 7) "corresponds so closely in every detail to the oinochoe" found at Tsotyli in western Macedonia (The Search for Alexander [Boston 1980] no. 112) that von Bothmer commented that "it is safe to assume that the two are from the same workshop". Gaunt in Greek Bronze Vessels notes two others (that were previously linked in the Derveni catalogue): one from Derveni (Grave B; no. B33) and the other from Kozani. He then adds that they "are products not simply of one workshop, but are in all likelihood by the same hand". Curiously he also observes:


Traces of fabric in the patina on one side of the body ... indicate that this vessel was wrapped at the time of burial, suggesting that its final (if not original) use was funerary.

Where was this burial? Macedonia seems a possible candidate.

Not included here is the "bronze volute krater", similar to the one from Trebenishte (in the Republic of Macedonia), now on loan from Shelby White to the Houston Museum of Fine Arts (MFAH). The curatorial staff at MFAH tell me that the volute-krater was "included ... as a part of the exhibition of bronzes from the Shelby White and Leon Levy Collection" (e-mail of February 8, 2008). Why did it fail to make it into the catalogue? Indeed, it also failed to appear in the catalogue for The Centaur's Smile: The Human Animal in Early Greek Art at Princeton University Art Museum (October 11, 2003 - January 18, 2004).

Is there something to hide?

No. Because Frances Marzio of MFAH has told us: "it’s not as though she [sc. Shelby White] is hiding anything."

I’d like to draw attention to yet another bronze krater from the Levy-White collection.

The bronze and silver inlay calyx krater that was part of the exhibition "History Contained: Ancient Greek Bronze And Ceramic Vessels" held at the McClung Museum, September 17, 2005 - January 2, 2006.

It would be interesting to know if this krater is still at McClung. Is Shelby repeating the method applied on the bronze volute krater at the MFAH? McClung doesn’t seem to be on the AAMD members list, but hay, MFAH is and still they ignore the "New Guidelines on Loans of Antiquities and Ancient Art" that they should feel bound to.

At the very least Shelby allowed for the calyx krater to be presented on-line. But alas, no collecting history or find-spot declared. Michel van Rijn claimed back in 2006 over his now defunct site, that this krater was looted and spirited out of Macedonia. He probably had mistaken it for the bronze volute krater on loan to the MFAH that can be clearly connected to the tomb looted near Koreschnica.

There are two bronze kraters to consider here:
a. The late classical calyx-krater (Greek Bronze Vessels, no. 9)
b. The archaic volute-krater (that is reported to be part of the exhibitions but does not feature in the catalogues)