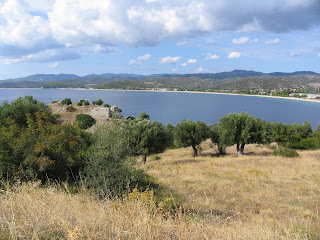 Greece is planning to take a tough stance on looted antiquities (Helena Smith, "The Parthenon marbles, and the rest please", Guardian Unlimited, January 24, 2008). Certainly there have been some recent successful claims: the Aidonia Treasure and several items from the J. Paul Getty Museum. But these are small scale when rated next to the successes of the Italian Government against North American museums, a dealer and a private collector.

Within weeks of assuming the portfolio last September, Greece's culture minister, Michalis Liapis, reinvigorated the war against antiquities smuggling saying it had become "the highest of all our priorities."

"I have contacted all of my opposite numbers across Europe with the purpose of creating a common front to combat the illegal trafficking of antiquities. In recent years art looting has assumed gigantic proportions with the result that, worldwide, it has become the third most profitable form of organised crime after weapons and drug smuggling. That has to stop," he said.

As part of the new offensive a department dealing exclusively with clandestine antiquities, and reinforced by the presence of a public prosecutor, will be set up at the ministry. Already, the mammoth task of digitally archiving treasures has begun while security at archaeological museums around the country has been increased.

One of the areas hit by looting is Macedonia. Among the treasures returned to Greece is the gold wreath removed from a tomb near Serres. And this is a regional problem. Archaic tombs have been rifled over the international border in the Republic of Macedonia.

The Cyclades are another badly damaged area. Yet as recently as 2006 a North American museum hosted an exhibition of Cycladic sculptures that included material from the notorious "Keros haul".

Attitudes in the museum and collecting communities need to change. Looting has both material and intellectual consequences. And Greece needs to be supported in its determined efforts to protect this part of its cultural, indeed our cosmopolitan, heritage.