The Parthenon Marbles and the Medici Conspiracy: There is a Difference 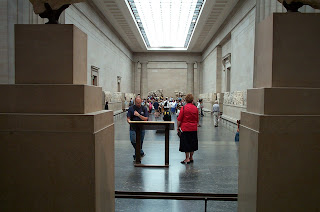 Michael Liapis, the Greek Minister of Culture, has linked the recent return of archaeological objects from North American collections to the debate about the Parthenon marbles ("Greece says momentum growing for Marbles' return", Reuters, March 17, 2008).

But the issues are very different.

The objects acquired by and returned from the Museum of Fine Arts in Boston, the J. Paul Getty Museum in Malibu, the Metropolitan Museum of Art in New York, and the Princeton University Art Museum (and not forgetting Shelby White) do not appear to have been known prior to the 1970 UNESCO Convention. Indeed many were acquired after the 1973 declaration by the Archaeological Institute of America (AIA). In other words, after 1970 (and certainly after 1973) museum curators, archaeologists and even private collectors were aware of the problems of looting and recently surfaced objects.

And some chose to continue buying and accumulating.

And the Medici Conspiracy has shown how the system worked: from the deliberate seeking out of archaeological sites (mostly tombs) to the movement of cultural property across international frontiers. There are even indications that some pots were deliberately smashed to ease the process.

It is probably also fair to say that of the eighty or so items returned from these North American collections to Italy, not one has a recorded find-spot (a few have alleged find-spots, and some of the pieces stolen from museums had come from excavations).

In other words, the archaeological contexts have been lost for ever.

So the pressing issue for Liapis should be to take action against contemporary looting of archaeological sites within the international frontiers of the modern state of Greece.

He makes the claim:

More and more museums are adopting tighter ethics codes and governments promote bilateral and international cooperation (for the return of ancient objects).

But I am not convinced that such ethical codes are working. I only have to look at the way that the 2006 Association of Art Museums Directors (AAMD) Report on the Loan of Archaeological Material and Ancient Art is ignored to realise that the debate is far from won.

Some museum directors and curators are still wanting to display freshly-surfaced antiquities. And loans are one way of getting round their professional obligations.

If Liapis looks out from the New Acropolis Museum he will be able to see the building where the Parthenon marbles were once displayed. These sculptures have not lost their archaeological context (even though many are currently residing in Bloomsbury). And they were acquired long before the 1970 UNESCO Convention - and long before somebody had even thought of the concept of the United Nations. Their return to Athens is not really about ethics - the issue is about the most appropriate place to display these sculptures from an iconic Athenian building.

Mr. Liapis was in New York very recently, and officiated at the opening of an exhibition of Minoan antiquities at the Onassis Cultural Center. He was accompanied by former prime minister Constantinos Mitsotakis, a renowned collector of such artefacts.

"Culture Minister Mihalis Liapis officially inaugurated here on Thursday morning (Greek time) an exhibition titled "From the Land of the Labyrinth: Minoan Crete, 3000-1100 B.C." in the presence of many U.S. and Greek personalities

The exhibition, which will run until September 13, is being hosted at the Cultural centre of the "Alexandros Onassis" Foundation in Manhattan

"Most of the exhibited artifacts have never been displayed outside Greece," Liapis noted in his inauguration speech, highlighting at the same time the "historic and archaelogical importance" of Minoan civilisation

... Among those present at the inauguration were the president of the "Alexandros Onassis" Foundation Antonis Papadimitriou,former prime minister and honorary president of the ruling New Democracy (ND) party Constantine Mitsotakis and Archbishop of America Dimitrios"