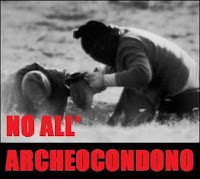 The Italian Associazione Nazionale Archeologi (ANA) has launched a campaign against a change in the Italian law relating to recently-surfaced antiquities (English; Italian). Although some will see the law as helping to notify chance finds, there is a likelihood that others will use it to target archaeological sites.


If the law is approved, anyone in possession of archaeological artifacts, even if those artifacts came from illegal excavations, will be able to obtain from the State a renewable permission to keep the object for the duration of 30 years. All they will have to do is declare that they have been in possession of the artifact since before December 31, 2009, and pay a modest fee.

The antiquities thus “legalized” will also probably be allowed to be bequeathed in wills or even sold. The department of cultural heritage will only have the power to contest the declared value of the artifact and request the difference.

Thus overnight, the law will officially transform looters and the “archaeomafia,” which the current legal system condemns and prosecutes, into collectors and managers of cultural heritage, who with the antiquities they have robbed from the public patrimony, can engage, legally, in commercial activities and with museums and art galleries.

There are concerns that the so-called "archaeomafia" will use the changes to justify raiding archaeological sites such as tombs to retrieve objects that can be sold at a future date.

If the Medici Conspiracy has taught us one thing it is that archaeological sites in Italy have been the targets for those seeking to obtain sellable antiquities that have ended up in high profile museums and private collections. [See review article.]

The statement concludes with an appeal:

We invite the whole world of cultural heritage and antiquities, all the peaple and those who in Italy and abroad hold dear the Italian archaeological and artistic patrimony, which constitutes our nation’s cultural identity itself and belongs to the cultural patrimony of all mankind, and is protected by our constitution, to mobilization against this law that would render vain in our country any legal efforts of protection and archaeological research.

There is a Facebook site and an online petition.

In view of recent events surrounding the returns of looted artefacts to Italy,it appears incredible that Italy would pass a law that would enable looters to keep their looted objects. Surely this will be sending the wrong message to future looters. I sincerely hope that this law will not pass for it will also undermine efforts elsewhere to control looting of antiquities.