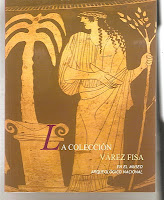 The October 2008 sale of part of the Graham Geddes collection was disrupted when the Italian Government requested that some of the lots be withdrawn on the eve of the auction in London.

I note that (at least) three ex-Geddes pieces appear in the Várez Fisa collection now on display in the National Museum of Archaeology in Madrid.


The December 1982 Sotheby's sale is significant. Two pieces that surfaced through it have now been returned to Italy: a Lucanian nestoris from Boston (and once loaned by Geddes) (lot 298) and an amphora attributed to the Berlin painter returned from New York (lot 220). Bonhams had to withdraw an Apulian hydria from auction in October 2008; it had originally surfaced at the May 1984 sale at Sotheby's.

See my list of items linked to Graham Geddes at auction where two of these pieces appear to be listed.