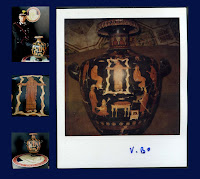 The seizure of a stock of 20,000 antiquities from a Japanese dealer, reported to be Noryioshi Horiuchi, in Switzerland raises a number of issues.

a. What are the documented sources for all these objects? When did they surface?

b. How many objects can be linked directly to dealers such as Giacomo Medici (e.g. a hydria) and "colleagues"?

c. Was the Japanese dealer consigning objects to auctions and selling items to other dealers in London, New York and elsewhere?

d. Which other countries are likely to have a claim on the stock?

e. What is happening to the objects that have not been returned?

f. What are the documented collecting histories of the objects that have not been handed over to Italy? How many have surfaced on the market since 1970?

During 2010 two high-profile auction-houses, one in London and the other in New York, appear to have offered toxic antiquities linked to Giacomo Medici; one of them also offered material that was linked to Robin Symes.

Has the time come for dealers to move away from simple searches on the Art Loss Register (ALR) and other databases? Instead, should they adopt a more rigorous ethical position and insist on properly documented collecting histories that can be traced back to the period before the 1970 UNESCO Convention?

Dealers and auction-houses could ignore the issue. But those involved in the trade also need to remember the adverse publicity that can be generated by turning a blind eye.

Image
Composite picture of a hydria featured in the Medici Dossier and returned to Italy from Switzerland.