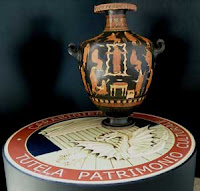 The Italian Ministry of Culture has now issued a full press statement (and pictures) of the returns. It appears that this is part of a major investigation into the assets of London-based dealer Robin Symes. A raid on a Swiss businessman has recovered 'hundreds' of folders apparently relating to transactions, some relating to archaeological material from Italy. There is clearly evidence of the use of the Geneva Freeport.

A raid in the Freeport on the premises of a Japanese dealer in December 2008 revealed ... 20,000 objects, some from Italy. Apparently the unidentified dealer decided to co-operate.

But what will happen to the 19,500 (or so) other objects? Where are they from? Will they be returned? Do they have secure and documented collecting histories?

Which museums and private collectors have been supplied by this Japanese dealer? Did he supply the Miho Museum?

Story and pictures from La Repubblica