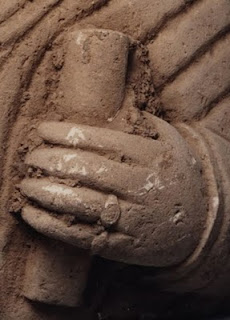 The left hand of this Roman limestone statue is still covered with traces of encrusted earth. The statue was clearly fresh out of the ground at the time that the photograph was taken. This statue had not come from an "old European collection".

But the statue is clutching one thing: "a French export licence".

Image
Detail from a limestone statue that passed through the stock of a European dealer.

Email ThisBlogThis!Share to TwitterShare to FacebookShare to Pinterest
Labels: France