Save the Anglo-Saxon Stone! "So what is it doing in a saleroom?" 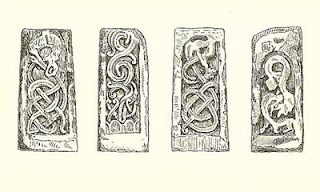 I have been following the forthcoming sale of antiquities at Bonhams with more than a passing interest. I drew attention to the way that Bonhams had reminded us that some of the archaeological objects would have "interesting" collecting histories.

I see that Mike Pitts of the Guardian has an important report ("Antiquities: an ancient cross to bear" / "Save our Anglo-Saxon Stone!", April 26, 2010) on lot 286, "late Anglo-Saxon stone section of a cross-shaft". It comes from "St Pega's Hermitage in Peakirk, Northamptonshire".


Professor Rosemary Cramp, from Durham University, is leading a project to catalogue all surviving Anglo-Saxon stone sculpture. As it happens, she and Joanna Story, a lecturer at the University of Leicester, are in the process of recording Northamptonshire - hence a visit the Evereds recently received from a geologist in Cramp's team. St Pega's cross, says Story, is a typical piece from the important Peterborough school of Anglo-Saxon art, and one of very few sculptures that can be linked to a place whose significance in Anglo-Saxon times is known.

Graham Jones, an Oxford University researcher and student of early Christian saints, says the stone is "part of the core historical heritage of the country".

So what is it doing in a saleroom - from where it could in theory end up anywhere in the world, and, as academics most fear, disappear from public view?

The events of last week have demonstrated that Bonhams is happy to handle controversial pieces.

Bonhams established it [sc. the cross] was not part of the listed building, which would have prevented the sale: the church had simply sold it with the house without restrictions, and it's not physically attached. ...

But there is a more important issue here.

Has the cross been "removed from a building or structure of historical, architectural or archaeological interest where the object has at any time formed part of the building or structure"? Would the cross be protected under the Dealing in Cultural Objects (Offences) Act 2003? (Just to remind readers, anybody convicted of handling such material can be imprisoned for a maximum of seven years.)

The present owner now realises the issues and wants to withdraw the cross from the sale - but is reported to be faced with a £9000 plus "consignment fee" if the sale does not proceed. Bonhams needs to seek some goodwill from the archaeological community.

So how about waiving the consignment fee so that the present owner can present this historically important cross to the Peterborough Museum?

Image
From The Guardian.