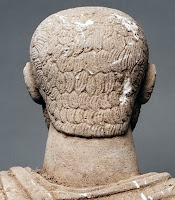 
"Acquired on the London art market in 1998. Accompanied by a French export licence."

I wonder which dealer handled them and who has consigned them to this sale.

Image
Detail of the rear of the head of a Roman limestone statue.

Email ThisBlogThis!Share to TwitterShare to FacebookShare to Pinterest
Labels: Bonham's