A Roman Statue from the Medici Polaroids 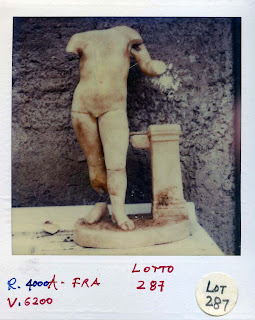 The raid on the warehouses in the Geneva Freeport yielded a major stache of Polaroid photographs illustrating what had passed through the hands of Giacomo Medici. I have noted before the significance of the Sotheby's sale of December 1986 that included two pieces from the Graham Geddes collection. Here is an image of another piece that passed through the same December 1986 sale at Sotheby's in London: a Roman marble statue (lot 287).